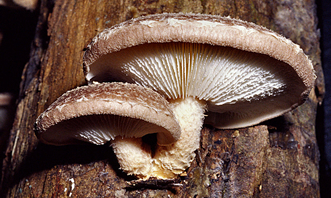 Bottom Line: Lentinan, a polysaccharide extracted from Shiitake, may help extend the survival of patients with some cancers when used with chemotherapy.

The medicinal properties of Shiitake mushroom are attributed to a polysaccharide (sugar molecule) named lentinan, on which extensive research has been done. Lentinan is a polysaccharide called a 1,3 beta glucan. In laboratory tests, lentinan does not kill cancer cells directly, but enhances a number of aspects of the immune system, which may aid in the slowing of tumor growth. Lentinan also kills viruses and microbes directly in laboratory studies. Most studies involving lentinan involve intravenous or intramuscular injections. It is uncertain whether ingestion of shiitake mushrooms provides similar effects. One clinical trial has shown shiitake extract alone is not an effective treatment for prostate cancer. More studies are needed.

Shiitake mushroom, native to East Asia, is cultivated worldwide for its purported health benefits. The fresh and dried forms of the mushroom are commonly used in East Asian cooking. It is also valued as an anticancer agent.
Lentinan (1,3 beta-D-glucan), a polysaccharide isolated from Shiitake, has been well studied and is thought responsible for the mushroom’s beneficial effects. It was shown to have anticancer effects in colon cancer cells (1), which may be due to its ability to suppress cytochrome P450 1A enzymes that are known to metabolize pro-carcinogens to active forms (2).
Lentin, the protein component, has strong antifungal properties, inhibits proliferation of leukemic cells, and suppresses the activity of human immunodeficiency virus-1 reverse transcriptase (3). Studies conducted with Shiitake extracts in vitro and in mice revealed the mushroom’s antiproliferative (4), cytotoxic (21), immunostimulatory (4), hepatoprotective (5), antimutagenic (6), and anticaries (7) properties, but a clinical trial failed to show effectiveness in the treatment of prostate cancer (8).

Results from two small studies of HIV-positive patients who were administered intravenous lentinan showed a statistically insignificant increase in CD4 cells and neutrophil activity in some patients; researchers also reported severe adverse effects in some patients (9).
But improvements in quality of life and survival were seen with an oral formulation of superfine dispersed lentinan in patients with hepatocellular carcinoma (15), gastric (16), colorectal (17), and pancreatic (18) cancers. An orally administered Shiitake mycelial extract decreased the incidence of adverse effects associated with chemotherapy in a small study of patients with advanced gastrointestinal cancer (22).
Large scale studies are needed to establish Shiitake as a useful adjunct to cancer treatment.

Lentinan possesses immune-regulatory, antimicrobial, anti viral, and cholesterol-lowering effects (13). The water extract of shiitake decreased IL-1 production and apoptosis in human neutrophils. However, it increased apoptosis in U937 monocytic cell line (14). Lentin, the protein component of shiitake, has strong antifungal effects. An in vitro study has shown lentin can inhibit the proliferation of leukemia cells and suppress the activity of human immunodeficiency virus-1 reverse transcriptase (3).

Few significant clinical studies have been performed with the shiitake mushroom. However, lentinan, a polysaccharide component of the mushroom, has been studied extensively.