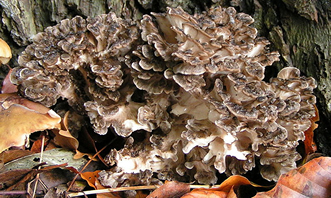 Maitake is a mushroom that traditionally has been used in Japan and China as part of the diet and to treat diabetes and hypertension. Like other medicinal mushrooms, maitake contains a complex sugar called a beta-glucan. In laboratory studies, maitake extract was able to stimulate various cells and factors in the immune system. Studies in animals show that it slows the growth of certain tumors and lowers blood glucose (sugar) levels. More studies are being conducted to determine if maitake has the same effects in humans.

Purported Uses
Do Not Take If
Clinical Summary

Maitake mushroom is an edible mushroom consumed widely in Asia as food and used in traditional medicine to treat diabetes and hypertension. Maitake extracts are commercially available as dietary supplements marketed to “enhance immune function” and to treat HIV and cancer. Beta 1,6-glucan, a protein bound polysaccharide, has been identified as the active constituent.

Maitake mushroom is an edible fungus. The whole mushroom can be fried or boiled.

Maitake is thought to exert its effects through its ability to activate various effector cells, such as macrophages, natural killer cells, and T cells, as well as interleukin-1 and superoxide anions (2) (3) (4) (13). Studies also suggest possible hypoglycemic activity (9). The anti-diabetic effect of alpha-glucan may be due to its effects on insulin receptors by increasing insulin sensitivity and ameliorating insulin resistance of peripheral target tissues (12).
Maitake extract enhanced the growth and differentiation of mouse bone marrow cells treated with doxorubicin, a chemotherapeutic agent (11). In addition, maitake extract may modulate antigen presentation as evidenced by protection of mice against tumor implantation following transfer of dendritic cells from tumor-bearing mice that were treated with maitake extract (15).
Maitake D fraction demonstrated antitumor activity by upregulating expression of a proapoptotic gene, BAK-1 (23). In another study the beta glucan GFPBW1 also showed antitumor effects thought partially due to activation of macrophages via the Dectin-1/Syk/NF-κB signaling pathway (24).

Maitake may not be appropriate for those taking hypoglycemic medications as it can have synergistic effects (9).