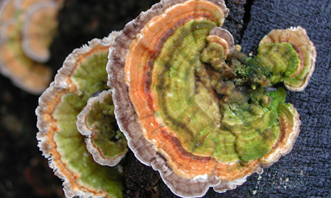 Bottom Line: Coriolus versicolor extracts have been studied in cancer patients with some positive results. However, more studies are needed to verify their effects.

Coriolus versicolor is a mushroom that is used in traditional Chinese medicine as a tonic. PSK and PSP, polysaccharide compounds isolated from Coriolus, were shown to improve immune function in patients with certain cancers when used along with chemotherapy.

PSK is approved for clinical use in Japan. Purified PSK, PSP extracts, or raw Coriolus extract alone or in combination with other herbs were used in clinical studies. However, the clinical effects of these products have not been compared.

Coriolus versicolor is a mushroom of the Basidiomycetes class. It is used in traditional Chinese medicine as a tonic, and recent studies suggest that it has immunostimulant and anti-tumor properties. Polysaccharide-K (PSK), a proprietary product derived from Coriolus, was developed for cancer treatment in Japan. When used as an adjuvant, PSK appears to improve survival rates in patients with gastric (1) (2) and colorectal (3) (4) (5) cancers. Other Coriolus extracts, such as polysaccharide-peptide (PSP) and VPS, are available as dietary supplements. One clinical study demonstrated that when used in conjunction with chemotherapy, PSP may benefit patients with advanced non-small cell lung cancer (6). Other clinical studies using Coriolus extract alone or in combination with other botanicals also suggest positive immunomodulatory effects (7) (8). However, studies on breast cancer (9), hepatocellular carcinoma (10), and leukemia (11) produced mixed results. A hot water extract of Coriolus, VPS, was found to enhance development of large intestinal tumors in mice (12). Coriolus extracts are generally well tolerated but minor adverse effects have been reported.

Many over-the-counter Coriolus products are not standardized, making it difficult to compare potency between brands. It is also unclear if PSK, PSP, and other Coriolus extracts have comparable effects.

Coriolus versicolor is thought to be a biological response modifier. PSK has been found to induce cytokine expression in human peripheral blood mononuclear cells in vitro. In other studies, PSP, as well as Coriolus extract, selectively induced apoptosis of human promyelocytic leukemia HL-60 cells (13) (23). It also increased apoptotic cell death in cells that had been treated with camptothecin. In these cells, PSP reduced cellular proliferation, inhibited cell progression through both the S and G2 phases of DNA replication, reduced 3H – thymidine uptake, and prolonged DNA synthesis time (14). An additional in vitro study showed that a medicinal mushroom blend that included Coriolus inhibited cell proliferation and induced cell cycle arrest at the G2/M phase in the invasive human breast cancer cell line MDA-MB-231 (15). DNA-microarray analysis indicated that the mushroom extract inhibited the expression of cell cycle regulatory genes and suppressed metastatic behavior through the inhibition of cell adhesion, cell migration, and cell invasion. The inhibition of metastatic behavior was linked to the suppression of urokinase plasminogen activator (uPA) (15). PSP has also been shown to inhibit the interaction between HIV-1 gp120 and CD4 receptor, HIV-1 transcriptase activity, and glycohydrolase enzyme activity associated with viral glycosylation (16).

Non-small cell lung cancer patients have increased leukocyte and neutrophil counts, and increased serum IgG and IgM after consumption of PSP (6). Healthy volunteers as well as breast cancer patients who used a formula containing Coriolus and Salvia were found to have elevated counts of T-helper lymphocytes (CD4+), a high ratio of CD4+/CD8+, and elevated absolute counts of B-lymphocytes (7) (8). TNF-alpha and IL-8 gene expression were also found to be significantly induced after PSK administration in healthy volunteers and gastric cancer patients, although individual response varied (20). PSK was shown to induce apoptosis in promyelomonocytic leukemia HL-60 cells without inducing differentiation, and p38 MAPK (mitogen-activated protein kinas) was found to play an important role in this process (24).

Absorption
Animal studies with radiolabeled PSK show that it is partially decomposed to small molecular products in the digestive tract. The full molecular spectrum of labeled PSK is absorbed within 24 h following oral administration in mice. Peak plasma levels of low molecular weight substances occur at 0.5-1 h in rats and 1-2 h in rabbits, while molecules the size of PSK appear in serum after 4, 10, and 24 h.

Adverse reactions from Coriolus are rare. But passage of dark colored stools (not originating from occult blood) (21), darkening of fingernails (22), and low-grade hematological and gastrointestinal toxicities have been reported when used in conjunction with chemotherapy agents (3). However, such effects may be caused by the chemotherapy agents themselves.

Wong CK, et al. Immunomodulatory effects of Yun Zhi and Danshen capsules in health subjects—a randomized, double-blind, placebo-controlled, crossover study. Int Immunopharmacology 2004;4:201-211.
One hundred healthy subjects were given a combination of Yun Zhi (Coriolus versicolor, 50 mg/kg body weight) and Danshen (Salvia miltiorrhiza, 20mg/kg body weight) capsules or placebo for four months. After a 2-month washout period, subjects who received Coriolus and Salvia capsules were given placebo while those on placebo received Coriolus and Salvia capsules for another four months. Researchers used flow cytometry and cDNA expression arrays to assess immune functions and gene expression. Results indicated that oral consumption of Coriolus-Salvia capsules significantly increased the peripheral blood mononuclear cell (PBMC) gene expression of interleukin (IL-2) receptor, increased the percentage and absolute counts of T helper cell and ratio of Thelper/Tsuppressor cells, and also the production of interferon-gamma from PBMC. Since T helper cells participate in both cell mediated and humoral immunities, Coriolus-Salvia combination may be used to enhance immune function. Studies are being conducted in cancer patients to determine the immunomodulating potential of these agents.