Immunotherapy – the next generation of cancer treatment

Previous
Immunotherapy – the next generation of cancer treatment

The economic cost of cancer reached $1.2 trillion in 2010, according to the World Health Organization. Despite the investment in treatment and prevention, 8.8 million people died of cancer in 2015. In 2018, more than 1.7 million just in the U.S. will develop a tumor for the first time, and nearly 600,000 people will be killed by cancer. That number is projected to increase to 14.6 million in 2035.

After many years of disappointing results, the tide has finally changed and immunotherapy has become a clinically validated treatment for many cancers. Immunotherapeutic strategies include cancer vaccines, oncolytic viruses, adoptive transfer of ex vivo activated T and natural killer cells, and administration of antibodies or recombinant proteins that either costimulate cells or block the so-called immune checkpoint pathways, natural compounds.  Cancer immunotherapy is an emerging branch of medicine that calls on our immune systems to act as intermediaries in the battle against a tumor

The idea of exploiting the host’s immune system to treat cancer dates back decades and relies on the insight that the immune system can eliminate malignant cells during initial transformation in a process termed immune surveillance .  Cancer develops through a combination of genetic and epigenetic changes when the body’s immune system fails to attack tumor cells, even though they are growing out of control facilitating immortality,

Nevertheless, although the immune system is capable of noticing differences in protein structure at the atomic level, cancer cells manage to escape immune recognition and subsequent destruction. To achieve this, tumors develop multiple resistance mechanisms, including local immune evasion, induction of tolerance, and systemic disruption of T cell signaling. Scientists have known for decades that cancer cells are particularly efficient at suppressing the body’s natural immune response, which is why most treatments exploit other means, such as surgery, radiation therapy and chemotherapy, to eliminate neoplastic cells.  James Allison, PhD, Chair of Immunology and Executive Director of the Immunotherapy Platform at the University of Texas MD Anderson Cancer Center, has been awarded the 2018 Nobel Prize in Physiology or Medicine for launching an effective new way to attack cancer by treating the immune system rather than the tumor.  James Allison  and Tasuku Honjo of Kyoto University in Japan each discovered ways to remove the immune system’s “brakes” that prevent it from attacking tumor cells. Dr. Allison identified a checkpoint called CTLA-4. Dr. Honjo found a different one, called PD-1. 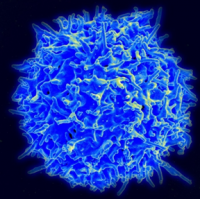 Scanning electron micrograph of a human T lymphocyte (also called a T cell) from the immune system of a healthy donor. (Image: NIAID)

James Allison studied a known protein that functions as a brake on the immune system. He realized the potential of releasing the brake and thereby letting our immune cells to attack tumors,”  They identified a key receptor on the surface of T cells that they called cytotoxic T-lymphocyte antigen 4, or CTLA-4. Allison and others found that the T- cells carry molecules called checkpoints, that the body uses to shut the cells down when it needs to stop them. Cancer cells can lock those checkpoints, preventing them from fighting the disease.They wondered whether blocking the blocker—the CTLA-4 molecule—would set the immune system free to destroy cancer. 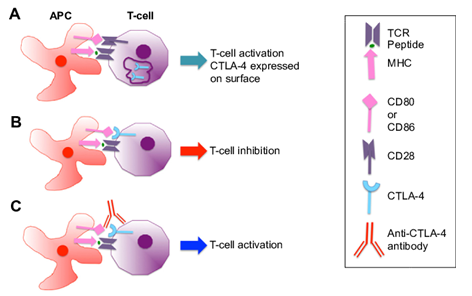 Allison’s and Honjo’s discoveries have added a new approach in cancer therapy. It represents a completely new principle, because unlike previous strategies (surgery, chemotherapy, radiation), it is not based on targeting and killing the cancer cells, but rather  the checkpoints – of the host immune system.  A large number of checkpoint therapy trials are now underway against most types of cancer

A lot of progress has been reported in treating some cancers in recent decades. Many cancers remain difficult to treat.
Conventional treatments and approaches often involve serious limitations, including limited effectiveness, side effects and expense. Various types of chemotherapies fail due to adverse reactions, drug resistance, and target specificity of some types of drugs.

Cancer therapy has long depended on strategies that directly attack tumor cells to treat patients. Cancer immunotherapy, the treatment that harnesses the patient’s immune system to fight cancer, is now emerging as an important addition to conventional therapies. Immune checkpoint blockade therapy, in particular, has undoubtedly been one of the most impressive advancements made in cancer therapeutics in recent years..
The biggest advance has been the arrival of immunotherapy drugs, known as checkpoint inhibitors, which remove brakes in the immune system so it can fight cancer as it does other foreign invaders such as viruses. Cancer cells are always looking for ways to grow and evade detection by the immune system. Many cancer cells will actually increase their concentration of a protein called PD-L1 as this will inactivate immune cells when they come in contact with it. By doing this it essentially creates a field around the tumor which inactivates the immune system as it gets close to the tumor.
New drugs  blocks the PD-1 receptors on T-cells so that the cancer can no longer hide from your immune system. What is exciting about this pathway is that a wide range of cancers are dependent on this mechanism to survive.

Immunotherapy, which trains T-cells in the body to detect and kill cancer cells, is a growing field in which the pharmaceutical industry is investing heavily, and many experts consider it a turning point in the fight against cancer

Immunotherapy has many advantages over previous types of cancer treatments

1.) Immune cells “remember” cancer cells to keep them from coming back

2.) As tumors evolve, the immune system adapts in tandem

4.) The immune system can target and attack tumors anywhere in the body

5.) Immunotherapy can complement and build on the efficacy of other cancer therapies

6.) Immunotherapy has the potential to be effective for virtually all forms of cancer

Natural compounds with potent anti-cancer activities are widely available from different plant tissues. Eighty percent of the population worldwide traditionally use natural compounds contained in medicinal plants  and are largely dependent on them

Naturally occurring compounds target tumor cells by regulating cell death pathways such as extrinsic and intrinsic apoptosis pathways and autophagic pathways. Moreover, regardless of the specificity and efficiency of single target therapy, it is difficult to achieve optimal cytotoxic effects on cancer cells because of their rapid molecular adaptations. Synergistic interactions within multi-component drug preparations allow us to broaden the search for potential molecular targets in cancer cells.

Meanwhile, natural compounds have been used to treat various diseases and are becoming a significant research area for drug discovery. Synergistic interactions within multi-component drug preparations allow us to broaden the search for potential molecular targets in cancer cells, such as medicinal mushroom compounds in one formula.