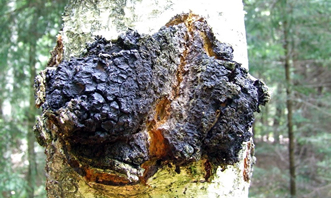 Bottom Line: Research is underway to determine the anticancer and immunostimulating effecs of chaga mushroom.

Chaga mushroom is found in Russia and has been used in traditional medicine. Studies show its constituents can kill cancer cells selectively and can stimulate the immune system. However, clinical trials are needed to verify chaga’s safety and effectiveness as a cancer treatment in humans.

Chaga has been shown to aid in treatment of certain cancers. More studies are being conducted to confirm its effects as an anticancer agent in humans.

No side effects have been reported.

Chaga mushroom, found on Birch and other trees in cold climates, has been used in folk medicine in Russia and other North European countries for generations. Chaga draws nutrients from the tree on which it grows and extracts are typically derived from the inner layers of the bark. The active constituents are thought to be a combination of triterpenes, such as betulinic acid, sterols, and polysaccharides. Chaga has demonstrated anticancer, antiviral, antiplatelet (2), anti-inflammatory, analgesic (3), immune stimulating properties in vitro, and hypoglycemic effects in mice (4). Chaga extract has inhibitory and proapoptotic effects against colon cancer (5) and hepatoma (1) cells. It also reduced toxicity associated with radiation (6) and inhibited tumor cell growth in animal models (7). In some studies, Chaga demonstrates selective apoptosis in tumor cells with no effects on healthy cells (1).
No clinical trials have been conducted to assess chaga’s safety and efficacy for disease prevention or for the treatment of cancer, cardiovascular disease, or diabetes.
Constituents of chaga mushroom extract may interact with anticoagulant and antidiabetic drugs.

Although chaga is an edible fungus, it is not commonly ingested due to its bitter nature. Tea can be made from the whole mushroom.

Chaga demonstrated hypoglycemic effects in mice with diabetes mellitus (4). It’s anti-inflammatory and pain relieving properties are thought to be via inhibition of nitric oxide synthase (iNOS) and cyclooxygenase-2 (COX-2) (3). An extract of chaga reduced the oxidative stress in lymphocytes from patients with from inflammatory bowel disease (8). Chaga also showed anti-mutagenic properties (9). A hot water extract of chaga exhibited inhibitory and proapoptotic actions against colon cancer cell proliferation via up-regulation of Bax and caspase-3 and down-regulation of Bcl-2 (5). Aqueous extracts of chaga also inhibited growth of human hepatoma cells via arrest of the cell cycle in Go/G1 phase and inducing selective apoptosis (1). The selectivity may also be a result of activation from a change in the pH of the tumor microenvironment (11). Betulinic acid, a constituent of chaga, is cytotoxic and triggers apoptosis through a direct effect on the mitochondria of cancer cells. Other apoptosis-inducing factors result in cleavage of caspases and nuclear fragmentation (7). Like many medicinal mushrooms, chaga is rich in beta glucans which have immunomodulating activities. Beta glucans bind to Complement Receptor 3 (CR3) that allows the immune cells to recognize cancer cells as “non-self” (10).