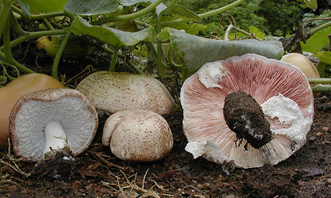 Bottom Line: Agaricus extract may benefit patients with certain cancers. But more studies are needed to confirm these observations.

Agaricus blazei is an edible mushroom grown in Brazil and Japan. It is used to treat arteriosclerosis, hepatitis, hyperlipidemia, diabetes, dermatitis, and cancer. Laboratory studies and experiments done in mice have shown that Agaricus can stimulate the immune system and has anticancer effects. Compounds present in Agaricus prevent formation of blood vessels needed for tumor development.
Agaricus may cause liver damage and death.

Cancer treatment:
Hundred patients with cervical, ovarian, and endometrial cancers were treated with either carboplatin plus VP16 (etoposide), or carboplatin plus taxol every 3 weeks for at least three cycles. They were divided into two groups that received oral Agaricus extract or placebo along with the treatments. Based on blood tests, researchers found that the Agaricus group had a significantly higher natural killer cell activity compared to those on placebo. In addition there was a reduction in chemotherapy associated side effects such as emotional instability, alopecia, general weakness, and decrease in appetite. However, there was no difference in lymphokine-activated killer and monocyte activities between the two groups.

Type 2 diabetes:
Because anti-diabetic activities of Agaricus have been previously reported, 72 participants diagnosed with type 2 diabetes for more than 1 year and currently taking gliclazide and metformin for more than 6 months received with Agaricus extract or placebo. After 12 weeks, improvements in insulin resistance were detected in the Agaricus-treated group.

Do Not Take If
Side Effects
Clinical Summary

Agaricus blazei is an edible mushroom native to Brazil and is cultivated in Japan for medicinal uses. It has been used to treat arteriosclerosis, hepatitis, hyperlipidemia, diabetes, dermatitis, and cancer. The polysaccharides and anti-angiogenic compounds present in Agaricus are thought to be responsible for its antitumor properties. Agaricus was also shown to have antidiabetic effects in vitro and in animal studies (8) (9).

Results from a study done in human subjects with type 2 diabetes suggest benefits of Agaricus extract in improving insulin resistance (10) (11), and a pilot study indicates that Agaricus extract may reduce weight, body fat, and serum glucose and cholesterol levels in healthy individuals (12).

The antitumor and immunomodulatory effects of Agaricus are due to immunopotentiation or direct inhibition of angiogenesis (3) (4) (6) (21) (22). An Agaricus extract enhanced doxorubicin-induced apoptosis against drug-resistant human hepatocellular carcinoma (24). Oral administration of the extract improved the natural killer cell activity and quality of life in gynecological cancer patients undergoing chemotherapy (7), but no such effects were seen in a study of elderly females (25). Large scale studies are needed.

While a small pilot study reported that Agaricus extract may improve liver function in patients with hepatitis B (13), liver damage and deaths (14) along with cheilitis (15) have been reported following consumption of Agaricus. Due to its immunopotentiating effects, Agaricus can potentially interfere with immunomodulating drugs although such interactions have not been reported.

Agaricus is an edible fungus. It is available as freeze-dried mushroom or as concentrated liquid extracts, teas, or capsules. The whole mushroom is often added to soups, sauces, or hot teas.

A recent study suggests that Agaricus extract has estrogen-like activity and may help prevent atherosclerosis via dual roles in cell signaling, macrophage development suppression and endothelial cell recovery from vascular damage (16). A major constituent of Agaricus, ergosterol, was found to inhibit tumor growth in mice via direct inhibition of tumor-induced angiogenesis (6). Other studies demonstrated that polysaccharides present in Agaricus extract caused activation of macrophages (5) or natural killer cells (17) and induced cytotoxic T-lymphocyte activity in tumor-bearing mice. Specifically, activation of natural killer cells was mediated through IL-12-induced IFN-gamma expression (18). Both aqueous and organic extracts of Agaricus offered protection to cells exposed to methyl methanesulphonate, a mutagenic agent. The stimulus produced by linoleic acid on beta-DNA polymerase, an enzyme involved in repair mechanism following exposure of DNA to alkylating agents, is thought responsible for such an effect (19). Furthermore, Agaricus extract stimulates caspase 3 activation and reduces telomerase activity (19) possibly through regulation of Akt signaling (20) thereby inducing apoptosis in cancer cell lines. Blazeispirol A, produced by Agaricus fermentation, causes both caspase-dependent and -independent cell death in human Hep 3B cells (21). Agaritine, a hydrazine-containing constituent exhibits anti-tumor activity toward U937 leukemic cells mediated through apoptosis (22).

Hsu CH, Liao YL, Lin SC, et al. The mushroom Agaricus blazei Murill in combination with metformin and gliclazide improves insulin resistance in type 2 diabetes: A randomized, double-blinded, and placebo-controlled clinical trial. J Alt Comp Med. 2007;13(1):97-102.
Because in vivo studies along with a small, pilot trial have reported the anti-diabetic activities of Agaricus, 72 participants with type 2 diabetes for >1 year and taking gliclazide and metformin for more than 6 months received with Agaricus blazei Murill extract or placebo. After 12 weeks, those participants receiving Agaricus blazei Murill extract (1500 mg daily) had reduced insulin resistance (as assessed by the HOMA-IR index) compared with the placebo-control group, which was accompanied by an increase in adiponectin levels. Further studies will not only determine whether adiponectin modulation is the mechanism by which Agaricus extract affects insulin resistance, but also the long-term clinical relevance of Agaricus for type 2 diabetes.

Ahn WS, et al. Natural killer cell activity and quality of life were improved by consumption of a mushroom extract, Agaricus blazei Murill Kyowa, in gynecological cancer patients undergoing chemotherapy. Int J Gynecol Cancer. 2004; 14(4):589-594.
In this study 100 patients with cervical, ovarian, and endometrial cancers were treated with either carboplatin plus VP16 (etoposide), or carboplatin plus taxol every three weeks for at least three cycles. They were randomized to receive oral Agaricus extract (three packs per day, one pack each time) or placebo along with the treatments. Blood samples were drawn one day before first chemotherapy and one day before second chemotherapy. Researchers found that the Agaricus group had a significantly higher natural killer cell activity compared with those on placebo. In addition there was improvement in chemotherapy associated side effects such as emotional instability, alopecia, general weakness, and decrease in appetite. However, there was no difference in lymphokine-activated killer and monocyte activities between the two groups. Further studies are required to confirm these observations.